Before I had the idea for Saudade, I knew that I wanted to put a novel on my blog. I just didn’t know what novel it would be. I had already started another novel, Romola. I thought I would put it up on the blog, but it found its way to wattpad.

Saudade came to me in a burst of sporadic ideas. I didn’t have one story line that I pieced together. It was just several things I had thought about over several times.

But most of the ideas were formed or merged as I read Sixfeetoffine Apple’s ‘The Devil’s Bargain‘ on wattpad.

Tomison (male protagonist) is supposed to be the dominant Alpha male type but he did not quite turn out the way I had envisoned. He turned out even better than I hoped. He was supposed to be a different take on the stereotype of a CEO. 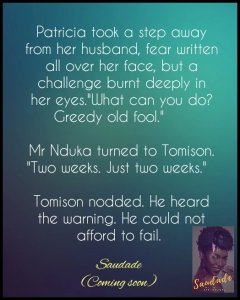 Aduke (female protagonist) as a character is a symbolism for a strong and independent woman who can hold her own forte. I choose her because she can stand up to Tomison and they can have a relationship of almost equals. The inspiration for Aduke is just a reaction to the stereotype of good submissive secretaries.

Like I said, I wanted to address the stereotype in office romance that I had seen in a couple of books that I had read. The sibling feud part was inspired by ‘The Devil’s Bargain.’ I really liked that idea.

I just read the story and I couldn’t help but think… What if the story went this way.

And that’s how I expand the ideas for some of my stories. I think, what would happen in this situation? What if the princess saved the knight? What if the villain actually achieves their goal?

That is the rhythm of my imagination. What if?

What if you leave a comment and tell me what you think? How do you expand your basic ideas? What if your imagination came true?

Hey. Tarimoboere is the name and writing is the game. I'm often described as a creative person, which makes sense because I'm a writer. I also doodle and sometimes, I pretend to be a mega music star but I am too much of an INFJ for that. I like cats but I'm afraid of animals so I admire them from pictures. I hope to publish my novels someday and hold them physically in my hands so I can flip and smell the pages. Until then, I focus on pouring out my thoughts and imaginations onto digital pages. View all posts by Tarimoboere

This site uses Akismet to reduce spam. Learn how your comment data is processed.